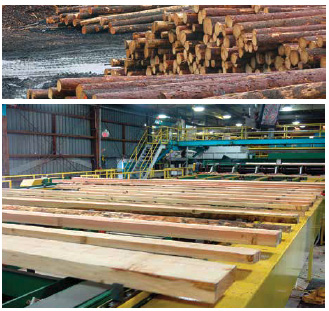 Prognostic maintenance: the approach to machine learning and asset integrity

The Canadian sawmill industry has been challenged during the recent global pandemic; hence they must constantly improve their competitiveness through operational performance and process sustainability through asset integrity and cost reduction.

Prognostic maintenance is part of the proactive asset management strategy based on the Industrial Internet of Things (IIoT) approach. The IIoT approach involves condition-based monitoring for equipment data collection, and the development of an advanced algorithm to predict early-stage component degradation, therefore avoiding unplanned breakages and maintenance cost.

During recent work at a member company, FPInnovations deployed the prognostic maintenance methodology to anticipate irregularities on a sawmill line. The goal was to measure online degradation in critical equipment’s components.

To reach operational performance objectives, the method is structured and sequenced time-based through:

SOLID RESULTS FOR ALL TYPES OF MILLS

In the example of the member mill whose capacity is of the order of 150,000 MFB annually, gains arising from the prognostic maintenance are also significant. These gains can be summarized as follows:

Proactive (prognostic) maintenance can be an effective and lucrative approach for many mills in the wood processing or pulp and paper sectors.

Both private industry and Indigenous private industry are beginning to deploy technologies developed over the past 20 years by the Canadian Wood Fibre Centre (CWFC) and Canadian Forest Service (CFS) that are focused on establishing fast-growing, high yield plantations on non-forested land.

The aim of these plantations is carbon sequestration and producing alternate sources of biomass for the pulp, processed wood and bioenergy industries.

Endeavors like these are good examples of projects that could be considered for support under the $3.24 billion committed to Canada's Two Billion Tree Program, which will operate for 10 years, from 2021 to 2031. The primary goal of the program is to address climate change through carbon capture by incrementally planting and growing trees to reduce greenhouse gas emissions by up to 12 million tonnes of carbon dioxide equivalent per year by 2050. Trees are natural carbon sinks.

"I am proud that over 50 per cent of our harvesting, planting, and maintenance crews are Indigenous women. FIND Biomass will continue to support local Indigenous families with employment opportunities," says CEO Minks.

"They started by participating in harvesting and demonstration activities of afforestation plantation management practices hosted by the CWFC," says Derek Sidders, Program Manager, Technology Development and Transfer at CWFC. "That evolved into harvesting of plant materials to establish stool beds or nursery beds, which involved recovery of plant materials from research and development sites established by CWFC and its partners."

He adds that the stool beds established by FIND Biomass on a four-hectare site near Kinuso feature growing stock of hybrid poplar clonal varieties proven suitable for planting in central Alberta and Saskatchewan.

"Their experience includes harvesting and processing one-year-old vegetative cuttings into whips in winter, which is when they are dormant," Sidders says.

The whips were processed into cuttings that are 10 cm. for a greenhouse container or 20 cm. to 25 cm. for direct field planting. Each cutting hosts at least three active vegetative buds.

So FIND Biomass has experience harvesting whips, processing them into smaller planting material, packaging them into bundles of 25, and then storing them wrapped in plastic-lined wax craft boxes in their cold storage facility at approximately -5 degrees Celsius.

"Their work over the past three years has established 20 to 25 employees that now have experience in harvesting and processing the cuttings," says Sidders. "Beyond that, their follow-up experience has consisted of planting actual cuttings and root cuttings in their stool field or nursery beds. These are propagation beds to supply vegetative cuttings for use in plantation establishment within Canada's Two Billion Tree Program or other initiatives. A workforce of between 20 and 100 employees is not out of the question in terms of annual employment."

The goal is to establish a new industry that develops moderate to skilled employment involving management of plantations, as well as supply of a labour force to manage nurseries, manage plantation sites, and in the long term, possibly recover the plant materials for final uses that go beyond just growing fast-growing trees and cuttings on the sites.

Left: Over 150,000 cuttings or rooted cuttings of various types of fast-growing hybrid poplar clones were planted on the four-hectare nursery site near Kinuso. FIND Biomass also has experience in vegetative management using mechanical cultivators, as well as hand tools to remove competition from the establishing whips in the stool beds, giving them the opportunity to establish and vigorously grow. Harvest and processing of the whips will supply cuttings for future new plantations, with the harvested stumps and roots producing the next coppice crop for harvest from each growing season, thus maintaining a sustainable supply of vegetative cuttings. 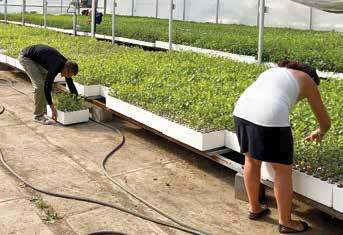 Below left: FIND Biomass has a training crew working in conjunction with some of the largest forestry nursery producers in Western Canada. Four employees are being trained to plant and manage greenhouse growing crops at one of their commercial greenhouses, the first crop being their own crop, which will be rooted cuttings available for spring planting in 2023. 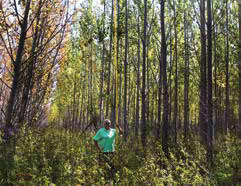 Right: Here is an example of what the planting stock provided by FIND Biomass could become, featuring an established hybrid poplar afforestation plantation planted in 2005 on a site located near Linaria, Alberta and owned by a large forest company. The site features Walker, Green Giant and Northwest fast-growing hybrid poplar clonal varieties. All are now in year 18 since planting. The Walker clone (right) is averaging 17 cm. DBH, and with the average being 18 m. measured in September 2022. CO2e capture is estimated at 224 tonnes/hectare over 18 years strictly in tree biomass. The site was previously agricultural land used for grain and oilseed production, and was converted to a fast-growing hybrid poplar plantation to sequester carbon and as an alternative feedstock source for pulp, OSB and bioenergy. The site has achieved an 82 per cent survival rate, with 88 per cent survival of the Walker clone. Management of the site at present is minimal with only peripheral disking to discourage rodents. During the first four years of the plantation from 2005 to 2009, there were one to three cultivations completed annually, initially straddling the trees, and then between the tree rows to control surface competition, to mulch it, drop it to the ground and to sequester some of that biomass into the soil for nutrients and moisture holding capacity.

Fenton Farms is another early adopter of CWFC/CFS high yield afforestation practices that are well-suited for those interested in participating in Canada's Two Billion Tree Program and who are searching for a growing stock supplier with experience.

Located west of Edmonton, Fenton Farms is a private company that has established its own fast-growing hybrid poplar plantations on property it owns. The plantations are being used for both the demonstration of fast-growing hybrid poplar alternatives, being located across from hundreds of hectares of reclaimable land situated adjacent to several fossil fuel power plants in the Wabamun Lake area, as well as a technical development site to train their operators and develop their practices.

Fenton Farms has a three-year-old plantation that was established in 2020 in partnership with CWFC. Since then, they have refined their practices and managed their demonstration site to promote suitable clones for afforestation establishment. The larger trees are already 3.5 m. and taller.

They have also established stool bed material over the past two years, which has diversified the company. They anticipate continued establishment of new plantations under afforestation scenarios using this fast-growing high yield afforestation design, having established a diversity of clonal varieties suitable for all three Prairie provinces. They will be harvested this fall, processed, and then stored in cold storage for deployment in 2023. 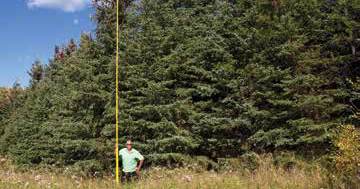 Below: Afforestation of softwood species are also eligible for participation in Canada's Two Billion Tree program, considering that white spruce is the primary softwood species in the boreal plains region, and is quite well adapted to the open plain. Private forest products companies in Alberta have established successful examples of this application to bolster their fibre supply in close proximity to their processing facilities. This plantation, which is comprised of Class 3 agricultural soil, is relatively flat and approximately 7 hectares in size. It is a pure white spruce stand planted 30 years ago with 2,200 to 2,400 stems planted per hectare. Now, their average diameter is 17 cm. at 1.3 DBH. The average height is 10.2 m., with a range of 7.8 m. to 11 m. in height. There is no vegetation in the understorey and the stand is vigorous and healthy. CO2e capture is estimated at 154 tonnes/hectare over 30 years strictly in tree biomass.